There are several telling stages of a stallion’s early career which have a huge bearing on his future success. High fertility is obviously a must, but it’s also important that breeders take to the horse as a sound commercial prospect, which of course depends on the quality of his pedigree, race record and conformation.

Should all these requirements be deemed satisfactory, the next test comes with the birth of his first foals. It’s difficult to overestimate how important a thumbs up from the industry is at this crucial stage, as it serves to confirm the stallion’s reputation as potential money-spinner for all those who have used him.

Arcano, who retired to Derrinstown Stud in Ireland after a highly impressive racing career, is increasingly looking like a stallion who’s got what it takes to succeed. A son of Champion Sire Oasis Dream out of a mare from the family of Gr.1 Prix de l’Abbaye winner Gilt Edge Girl, he was unbeaten at two, including a record-breaking defeat of Classic winners Canford Cliffs and Special Duty in the Gr.1 Prix Morny at Deauville.

A sprinting powerhouse, built in the mould of his sire, Arcano proved so popular with breeders when he retired that he was hugely oversubscribed for his first season. Taking to his new career with gusto, he covered his first full book of mares with excellent fertility.

Initial comments about his foals were uniformly encouraging, and, equally importantly, breeders are now reporting how well the youngsters are progressing through this vital early stage of their development.

Marie McCartan of Ballyphilip Stud is one of those satisfied customers. Speaking of her January filly foal by Arcano out of the Grand Lodge mare Great Joy, she said “We’re very happy with her, as she combines size, strength and quality. Her half brother, Xtension, was a very laid-back horse and this filly shows all the same characteristics at the same age. She spends a lot of her time lying down – just like he did!”

The filly’s pedigree received a significant extra boost a fortnight ago when the aforementioned Xtension recorded his second successive victory in the Gr.1 BMW Champions Mile at Sha Tin. European readers will remember the horse as a top class performer who won the Gr.2 Veuve Clicquot Vintage Stakes and was placed in the Gr.1 Dewhurst Stakes, Gr.1 Prix Jean Prat and Gr.2 Coventry Stakes.

Their dam, Great Joy, is a winning half sister to the dam of Wathab (Cadeaux Genereux), winner of the (now) Gr.3 Go And Go Round Tower Stakes, and runner up to One Cool Cat in the Gr.1 National Stakes at the Curragh. Her dam, Cheese Soup (Spectacular Bid), is half sister to the Group winners Minneapple and Baroness Direct.

On the back of his highly successful first season, Arcano was again fully booked in 2012, and, with his first foals causing such a stir, there’s every reason to assume the gravy train will keep rolling well into the future. 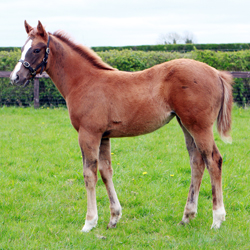