Al Bahathri the outstanding racehorse and Gr.1 producing mare passed away peacefully at the great age of 32.

Al Bahathri (whose name means ‘Lavender’) was a chesnut daughter of the Aga Khan’s French 2000 Guineas winner Blushing Groom out of Chain Store, an eight-time winner by dual American Champion Nodouble. She was bred by Tom Whitney at Gainesway Farm in Kentucky and bought as a yearling at the 1983 Keeneland July Sale for $650,000.

Put into training with Harry Thompson Jones at Newmarket, she quickly justified her price tag, winning the Gr.2 Lowther Stakes and Listed (then) Princess Margaret Stakes, and finishing third in the Gr.1 Cheveley Park Stakes from a disadvantageous draw.

At three, she nearly succeeded in making all the running in the 1000 Guineas at Newmarket, only to get caught close home by the subsequent Triple Crown winner Oh So Sharp. She then showed enormous grit and determination to win the Irish 1000 Guineas at the Curragh three weeks later and went on to win Royal Ascot’s Coronation Stakes, despite having to give weight all round.

In all, she won six of her twelve starts and will always be remembered as a genuine front runner whom Timeform described as “a pleasure to watch”.

Al Bahathri was retired to stud at the end of her three-year-old career and produced eight winners, including the dual Gr.1 and Classic winner Haafhd (foaled when she was 19) and the Gr.2 winner Munir. She is also grandam of the Gr.1 winners Gladiatorus and Military Attack (in Hong Kong).

Speaking of her demise, Stephen Collins said: “Al Bahathri lived out her final years in retirement at Derrinstown, and, until recently, had remained healthy despite her advancing year however recently she passed away peacefully”. 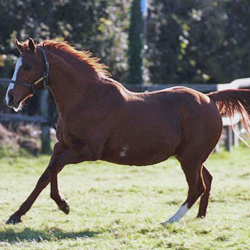 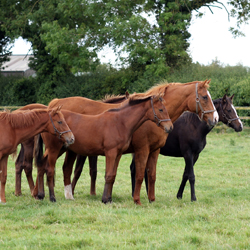 Al Bahathri acting as foster mother
to weanlings at Derrinstown